Established in 1938, Duncan Taylor is an independent whisky merchant with one of the largest privately held collections of aged single malt and single grain Scotch whisky casks.

One part of their range is Octaves, let's find out a little more:

The basic process is that the whisky is matured in standard 250ltr Hogshead Casks then transferred into smaller 60ltr to 70ltr Octave Casks for a second maturation period before bottling.
The Octave casks, roughly 1/8 the size of a butt, have been constructed from ex Sherry casks in Spain or ex Bourbon casks in Scotland. 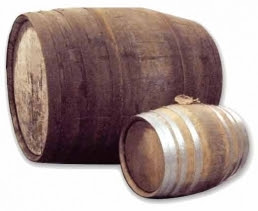 The smaller the cask, the more wood surface area per litre of liquid is available, creating more liquid interaction with the oak and therefore resulting in more influence on flavour from the cask. The whisky is bottled from a single cask at cask strength, it hasn't been chill-filtered or coloured, remaining in its natural state keeping the flavours and textures unaltered.
Duncan Taylor say:

"There is more wood interaction with the spirit over a shorter period of time in a small cask than in a large cask, therefore allowing a more rapid melding of wood, air and alcohol. The resultant spirit demonstrated a depth of maturity missing in a larger cask over a similar period of storage. On completion of a relatively short maturation period of a younger whisky, the spirit appeared smoother, more balanced with plenty of character more reminiscent of a long maturation. The rough edges were removed and the taste profile changed dramatically to what would be considered a whisky of a much more mature nature or vintage. The whisky became polished, bright and sparkled with intensity." 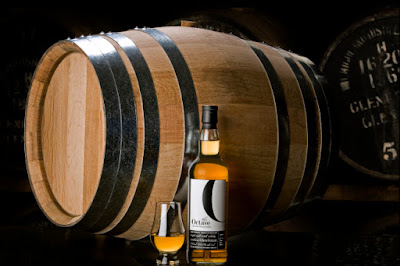 A number of indie bottlers have released Octave whiskies but Duncan Taylor's range of distilleries is probably have the largest. This month they released their latest bottling from "An Iconic Speyside" - let's see what's it's like: 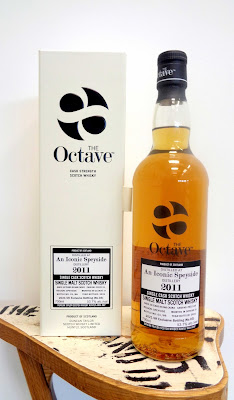 Appearance: dark gold in the glass, swirls clink as a thick line, bead up and fall as slow thick legs. Almost oily in appearance. 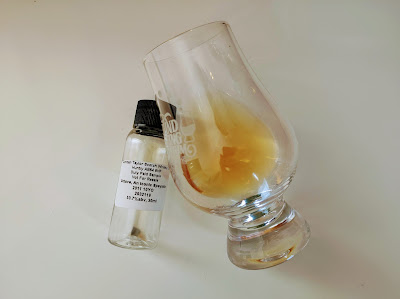 Nose: Huge fruit notes to start - orchard fruit: apples, pears, apricots; tropical fruit: pineapple mango; berries: strawberries, blackberries, raspberries and cherries. There's some caramel and milk chocolate with a little brown sugar. I was expecting some dunnage funk from the 9 months in the sherry octave but it was hard to find. A little time and air offers some marzipan, porridge and citrus - orange peel?
Palate: Thick syrupy arrival, very spicy - the high ABV making itself know immediately. The berries from the nose are most prominent - mixed fruit jam? The milk chocolate and brown sugar are here too, it's very dry on the palate - all the moisture being stripped from your mouth. A few more sips and the orchard fruit from the nose come through - apple and pears again but this time a little peach. There's a peppery spice left as the liquid disappears and a little orange barley sugar. Nice!
Finish: Lingering oaky dryness, a little peppery spice and a fruit bowl full of fruit notes.
Thoughts: First off - where is it from? Obviously DT aren't going to say! A little research and many point to Glenfarclas - a few to Macallan. The bottler notes say it was matured in oak casks before being finished for 9 months in a sherry octave, most of the output from these distilleries is straight into sherry casks...

At the end of the day it doesn't really matter - this is a lovely sherry finished dram, but the octave influence isn't overpowering - I was expecting a sherry bomb full of musty dunnage funk but this is far from that - rather a beautifully balanced dram, complex and tasty. Definitely something to savour as summer draws towards autumn and the evenings start getting cooler. (Yes I know it's only July but summer is over!)

Many thanks to Duncan Taylor for the sample.
By MaltMusings on July 14, 2021
Email ThisBlogThis!Share to TwitterShare to FacebookShare to Pinterest
Labels: Duncan Taylor, Glenfarclas, Macallan