Last night I spent a very enjoyable #wishkyhour drinking whisky with no one! Well that isn't entirely true.... Let me rewind a week or so!

I'm a huge fan of Twitter and follow a whole load of people in the #WhiskyFabric exchanging news, thoughts and sometimes dram samples. A post from one of these was an invite to a Twitter Tasting, I immediately signed up and a week or so later a bottle appeared in the post!


What I failed to realise at the time, but did once I'd looked at the bottle, was that this was going to be a blind tasting, we didn't know in advance what the whisky was! I was both intrigued and worried: how was I going to identify the dram, what if I didn't like it?

As the night grew closer a few messages were exchanged with other testers about the colour and possible source, but we all managed to avoid opening the bottle before the night!

Concerning the bottle: I've received many different ones in the samples I've received from companies and the #WhiskyFabric but none have been as nice as this. It was a little 50ml glass bottle with a lovely cork stopper and sealing sticker labeled "Hand Filled".

So on to the night: I connected to Twitter and set up a window showing the agreed hash tags #wishkyhour and #wishkyone and waited for the fun to start. Most of us were ready for the 8pm start time and we all eagerly poured a dram.﻿﻿﻿﻿﻿﻿﻿﻿

﻿
Appearance: lovely amber colour with slow falling legs when swirled around the glass, quite oily.
Nose: Winey, honey and lemon - later vanilla with a little pepper?
Palate: Loving the taste - coating my tongue - it's floral - cut grass? But no honey in the taste
Finish: Nice lingering finish - vanilla
Overall: Not peaty (like a normally drink) I detect maybe a little sherry?

My guesses were that we were trying an unsherried, 8-10 year old Speyside, I also suggested maybe an Arran. Other suggestions included Ballantines, anCnoc or Glengoyne.

We all agreed that we enjoyed the dram and we're eager to find out what it was! Right at the end one of the group @jonpearcewhufc guessed correctly!

If you haven't guessed what dram we were drinking yet from my notes - have a look over at the wishky blog.

There's another great write up here.
By MaltMusings on February 23, 2017 No comments: Links to this post
Email ThisBlogThis!Share to TwitterShare to FacebookShare to Pinterest
Labels: #BlindTasting, WishkyCo

With the recent price reductions at Tesco and a little persuasion from the #whiskyfabric (@dvdbloke @ocdwhisky @DrinksByTheDram ) I bought a bottle of the Lagavulin Distillers Edition to join the 16yo in my 'collection'. Here's my side by side taste test.

Colour : Deep Copper - the same as the 16yo
Glance : Oily, leaves thin trails when swirled around the glass.
Nose : Smoke like a bonfire, honey - quite different from the 16yo

Finish : Pepper, peat, vanilla - not as long as the 16yo.
Link : Distillers Edition


Overall : I love Islay malts, I love peat and I love Lagavulin, the bottle of 16yo sits proudly on my whisky shelf giving up regular drams for my enjoyment! When I saw the offer in Tesco for the DE, £55 from £70, I was tempted - a little banter from my friends on Twitter and I was persuaded!
They are two quite distinct drams, the sherry finish obviously making the difference but not in a overpowering sherry way. The dryness of the 16yo has gone and honey replaces the pear flavours on the nose and in the mouth. The DE is a lot 'easier' to drink if you aren't keen on Islay Peat Smoke - the sherry influence makes it smoother and less pronounced - but it is still there! Worth a try at £55 but maybe not at £70.
By MaltMusings on February 21, 2017 No comments: Links to this post
Email ThisBlogThis!Share to TwitterShare to FacebookShare to Pinterest
Labels: Lagavulin

101 Whiskies To Try Before You Die 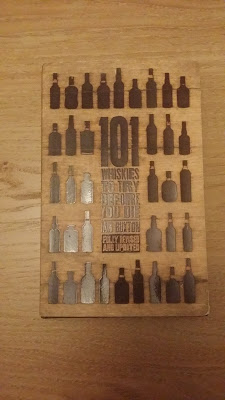 I've just finished Ian Buxton's recently updated '101 Whiskies To Try Before You Die' which I received for Christmas. Rather than rushing through it I treated it like a good Islay malt and sipped it slowly - reading only 5 reviews a night!

This is the third edition of the book first published in 2010, Ian has updated it each time when his selected whiskies fall outside of his two rules : either no longer available in a decent whisky specialist or online retailer or have been priced outside of his affordability limit. As he says "This book is for whisky drinkers not Russian plutocrats"!

There are no ratings just a 'simple' alphabetical list of 101 whiskies which Ian suggests you should "try before you die!" The book includes whiskies from all over the world - 65 from Scotland and others from Japan, Ireland, India, Australia, Wales and the USA. Most are single malts, some are blends and others made from rye or corn.

Each selection is given a two page spread with simple details about the whisky above a photo of the bottle followed by a whole page description (or story) of the whisky and distillery, some are very funny! Most then finish with brief tasting notes - one doesn't as Ian didn't receive a sample and another because as Ian says "try it in a cocktail .... as taste isn't really the point" !

Ian is obviously passionate about whisky and this book clearly shows that - his little anecdotes make this a fun book to read and I'd recommend it to anyone with even a passing interest in Whisky. 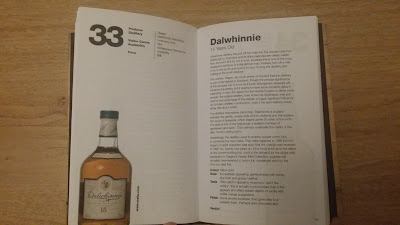 As with all things whisky this list is Ian's and some of us may not agree with all of his choices! Whilst he includes some of my favourites, he excludes others and even include a couple I wouldn't clean my toilet with (You know who you are WR.....)

The book is published by Headline and can be purchased for around £10.
By MaltMusings on February 13, 2017 No comments: Links to this post
Email ThisBlogThis!Share to TwitterShare to FacebookShare to Pinterest
Labels: Book, Ian Buxton

Characteristics : 700ml, 43% ABV, No info on colouring or Chill Filtering (but believed to have been both coloured and chill filtered)
Box/Bottle Information : "Fresh, sweetly fruity and smooth bodied. Caol Ila 12yo is as rounded and clear as the shapes of the still-room, glimpsed by hazy shafts of sunlight glancing through the morning cloud."

Palate: Smooth and mouth filling. Vanilla and pepper are prevalent on the tongue with .

Finish : Medium smokey finish with some drying pepper and citrus on the finish.

Overall : As I've said before I love smokey peaty Islay drams and grabbed this one when reduced to £30 in Tesco - I wasn't disappointed! Caol Ila (pronounced Cull EeLa) 12yo has only been available since around 2002, previously most of the malt was used for blending, but now it's fairly easily to get hold of and for £30 you can't go wrong!

Link : Caol Ila 12yo
By MaltMusings on February 13, 2017 No comments: Links to this post
Email ThisBlogThis!Share to TwitterShare to FacebookShare to Pinterest
Labels: Caol Ila

Colour : Pale Gold (Showing it's youth).
Glance : Oily, leaves thick trails when swirled around the glass.
Nose : SMOKE - it really hits you when you uncork the bottle never mind put your nose anywhere near it! Once that has settled down there is a lovely aroma of freshly smoked kippers - reminds me of trips to Whitby! The additional of a little water enhanced the smoked kipper smell.

Taste : Sweet and mouth filling, dried fruits and oats. The addition of a little water brings out the peat and a biscuit taste, also making the whisky very smooth.

Finish : Long and drying, initially with a slight alcohol burn (it is 50%), but this goes after a few more sips. Roast nuts and oak linger.

Overall : I'll admit I'm a bit (a lot really) of a Islay peat fan-boy, I love Lagavulin, Laphroaig and Ardbeg and this Port Charlotte is in the same class but slightly different - it has the peaty smoke and the mouth coating characteristics of the others but not the medicinal overtures. It's signed by Jim McEwan, who's now retired, and come out of retirement to join the new Ardnahoe Distillery team! I love it, it's my current go-to dram for a cold Winter's night (and Spring at the moment)!

Bruichladdich are strong advocates for #transparency in whisky, I've talked about this in one of my previous blogs, and I'm really impressed about the amount of information they give you on the tin and bottle:


Much better than "Perfectly balanced, naturally rich and smooth" than you get on some bottles.

But then Bruichladdich go one step further : with some of their whiskies you can enter a code from the bottle on their website and they'll tell you all about it - stuff their not allowed to but on the bottle because of EU regulations. Even better you can get in touch with them and they'll tell you - they are really a friendly lot!
For instance they told me that this whisky was made with Optic and Oxbridge barley harvested in September 2008 from the 6 farms mentioned on the box;  that it was distilled in December 2008 and that my wonderful dram was matured in American & European oak casks.

Why wouldn't we want to see all this information on the box or bottle?
By MaltMusings on February 09, 2017 No comments: Links to this post
Email ThisBlogThis!Share to TwitterShare to FacebookShare to Pinterest
Labels: #transparency, Bruichladdich, Port Charlotte
Newer Posts Older Posts Home
Subscribe to: Posts (Atom)