Normally I drink and blog about Scottish Whisky but on occasions I have tried others drams including some from Ireland, Wales, Sweden, India and Japan. As it's World Whisky Day today I thought I'd try a couple of Japanese whiskys and let you know my thoughts!

Both of my drams are from the Nikka Whisky Company owned by Asahi who own a number of distilleries in Japan and the Ben Nevis distillery in Scotland..

The first is Whisky from the Barrel (WFTB) a blend of malt and grain whiskies bottled at 51.4% and sold in 50cl bottles. 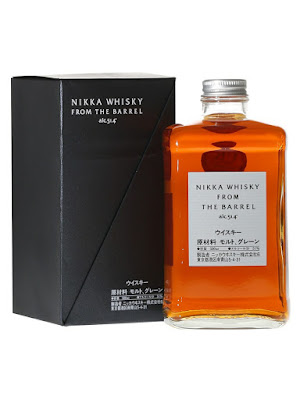 The second is Pure Malt Black (PMB) another blend, this time of malt whiskies, bottled at 43% again in 50cl bottles. 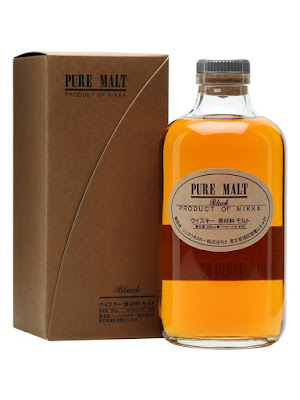 These are both blended drams with a mixture of malt and in the case of WFTB grain whiskies from the Yoichi and Miyagikyo distilleries.

My drams were both sample swaps, the WFTB from @Mcfcivo100 and the PMB from @ThisIsMyDram - thanks to both of you!

Price : £38 widely available
Colour : Deep Gold - coloured
Nose : The room fills with the aroma of toffee as soon as you pour this dram into your glass, closer inspection reveals green apple and vanilla and over time a honey note develops.
Palate : Coffee instantly on the tongue followed quickly by walnuts - it's like an old coffee walnut whip (can you still get them?) the walnuts persist and is joined by vanilla notes and a lovely spicy cinnamon.
Finish : A long dry finish dominated by them walnuts and a little spice.

Water : As this is a 51.4% whisky I tried a little water, this introduced some citrus notes to the nose with a hint of pepper, on the palate the spice reduced slightly.
Overall : This is a lovely sipping whisky, where the strength is instantly recognisable but not dominating. A little water brings out some citrus but other than reducing the strength doesn't make too much difference to the whisky. A lovely dram, well worth trying!
Link : WFTB

Price : £46 widely available
Colour : Deep Gold - coloured
Nose : Not as strong as the WFTB and quite different - a malty chocolate aroma with a strong hint of peat smoke. Over time this develops into toffee and orange peel with a hint of vanilla.
Palate : A smooth dram on the tongue but with a slight alcohol burn (surprising as this is 43%, I didn't get any on the 51.4% WFTB) it's dominated by chocolate and a little treacle.
Finish : A medium length dry dark chocolate finish with a little spice and a hint of smoke..

Overall : This is one of a set of three 'coloured' Pure Malts - Red is fruity (like a Speyside), White is Peaty (like an Islay) and this one, the Black, is some where in between. There were definite hints of peat smoke buy I didn't get any fruit - plenty of chocolate though!. A lovely dram, probably my favourite of the two - again - well worth trying!
Link : PMB
By MaltMusings on May 20, 2017 No comments: Links to this post
Email ThisBlogThis!Share to TwitterShare to FacebookShare to Pinterest
Labels: Nikka

A couple of weeks ago I was graced by a visit from @MaltmanMike where we planned to do a tasting of two Bowmores. Unfortunately due to some technical glitches (his recording equipment had been on the Bowmore before us) the recording was completely out of focus!

No doubt we'll have another go at a later date, but until then here are my thoughts on three Bowmore drams!

I'd bought the 9yo earlier in the year, the 15yo was a sample swap - thanks to @ThisIsMyDram and the Vaults was from the Maltman.

Whisky : 9yo Sherry Cask Finish
Characteristics : 700ml, 40% ABV.
Colour : Old Oak - coloured
Nose : Light smoke with toffee
Palate : Weak sherry, very thin develops a little vanilla .
Finish : Slight alcohol burn - surprising for a 40%, some smoke
Overall : This one hasn't improved much in the 5 months it's been sat on my shelf - see my previous review here. As I said then it would have been better blended with something more smokier and sold as a NAS.

Whisky : 15yo Darkest
Characteristics : 700ml, 43% ABV.
Colour : Old Oak - coloured
Nose : Bonfire smoke (from a distance) with salty sherry developing over time.
Palate : Thin sweet sherry developing to toffee with a little drying smoke.
Finish : Medium dry finish with light smoke
Overall : As others have mentioned this is a strange one where the name describes an artificial colour - come on Bowmore get rid of the caramel or sort out the marketing department.... This one was a much better dram than the 9yo.

Whisky : Vaults Edit1°n (NAS)
Characteristics : 700ml, 51.5% ABV.
Colour : Old Gold
Nose : Vanilla, smoke developing into salty bread dough.
Palate : Mouth filling, oily, salted smoked oranges - yummy
Finish : Dry salty finish with the orange coming back
With Water : This dram was over 50% so I also tried it with a drop of water - this brought out a sweet smokiness in the nose and palate and intensified the orange finish.
Overall : Definitely the best of the trio! This was in a different league to the other two even as a NAS. The addition of a little water really brought out the Islay smoke - it's not in the same ballpark as some of the other Islay peat monsters but lovely never the less!

OK so no vlog for this tasting but you can view Mike's other vlogs on the Maltman Mike YouTube Channel.
By MaltMusings on May 11, 2017 No comments: Links to this post
Email ThisBlogThis!Share to TwitterShare to FacebookShare to Pinterest
Labels: Bowmore

Another trip to the Prince Of Wales

I'm very lucky where I work that they let us out at 12 noon every Friday, this gives us a chance to visit some local hostelries and sample their wares. One of our regular haunts is the Prince Of Wales at Foxfield, it's a small pub on the Cumbria coast which boasts it's own brewery, regular beer, gin, rum and music festivals - check out their website.

There are normally 8 real ales on the bar plus a couple of ciders and many bottled delights. They also have a great, ever changing, selection of whiskies!

This week they held a Dark, Strong Beer & Cider Weekend so we had to visit! 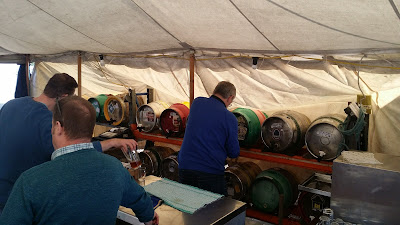 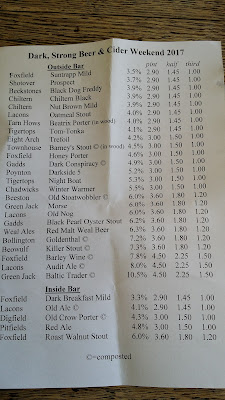 So whilst some of my colleagues made their way through the list of beers, I started with a few whiskies. 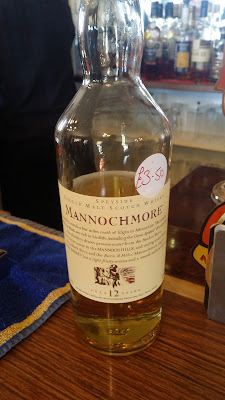 Whisky : 12yo (Flora & Fauna)
Characteristics : 700ml, 43% ABV.
Colour : Light Gold
Nose : Vanilla, Christmas cake spices
Palate : Smooth mouth filling vanilla, orange hints and those Christmas spices.
Finish : Long spicy finish
Overall : This is the first time dram which I spotted on the board from a distillery I couldn't remember sampling from before. It's part of the Flora & Fauna range of limited releases - I don't think these are very common? 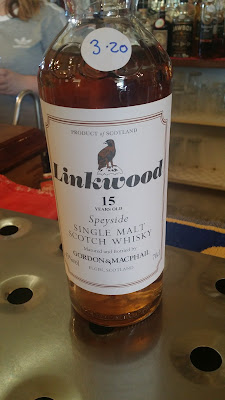 Whisky : 15yo (Gordon & MacPhail)
Characteristics : 700ml, 43% ABV. NCF, Uncoloured
Colour : Dark Gold
Nose : Vanilla and oak with a touch of cereal
Palate : Sweet vanilla, developing into chocolate
Finish : Long spicy sweet finish
Overall : Another dram which I spotted on the board from a distillery I couldn't remember sampling from before and definitely the best of the three I tried on the day. 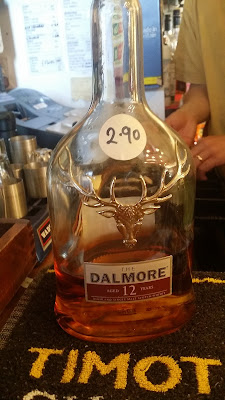 Whisky : 12yo
Characteristics : 700ml, 43% ABV. NCF, Coloured 😟
Colour : Dark Gold
Nose : Sherry and vanilla,
Palate : Dry sherry with hints of oranges and marshmallows
Finish : Long dry finish dominated by vanilla with a hint of spicy orange
Overall : Pretty standard fare this one but it was the first time I'd tried a Dalmore. Honesty I wasn't really impressed - nice bottle and presentation but just a little plain for me.
By MaltMusings on May 06, 2017 No comments: Links to this post
Email ThisBlogThis!Share to TwitterShare to FacebookShare to Pinterest
Labels: Dalmore, Flora & Fauna, Gordon & MacPhail, Linkwood, Mannochmore, Prince Of Wales

You never know what is going to turn up when you sign up and get accepted for one of @TheWhiskyWire's @TweetTasting and this one was no different. This one took a while to get my hands on - the DHL man tried to deliver it twice when I was away on holiday, then took it back to the depot - I was really concerned that it wasn't going to get delivered in time!

When it did arrive I opened a beautiful large box from @TamdhuWhisky with a hand written welcome letter, a booklet about the history of the distillery and tasting notes for two of the 4 bottles. Underneath was a beautiful glass and four small bottles.


The drams included : New Make Spirit, 10yo, 10yo Limited Edition and Batch Strength.

This tasting was a little different for a number of reasons:
Personally I thought the evening went a little quickly - there wasn't a lot of time for the usual twitter discussion - I'm guessing that's because the distillery tasters had a schedule to meet! 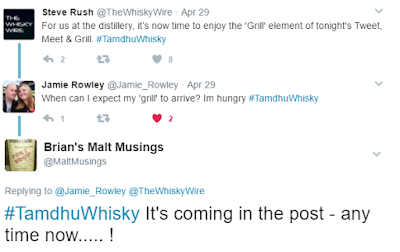 Distillery : Tamdhu
Whisky : New Make Spirit
Characteristics : 50ml, 69.7% ABV.
Colour : Transparent
Nose : Fresh baked bread with a little sweetness
Palate : Sweetness, lip numbing, like schnapps but at all rough like I expected!
Finish : None to speak of - must have been the alcohol
Overall : This is the first time I'd tried New Make Spirit from any distillery and was apprehensive when I saw the strength thinking it was be very rough and burning - it wasn't like that at all. Initially I'd only poured a small amount into my glass to try and soon topped it up! It was quite drinkable as long as you only took small sips. 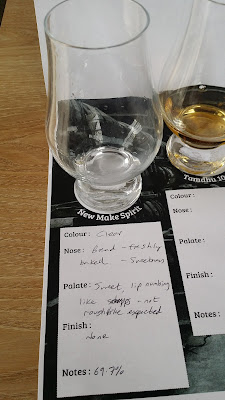 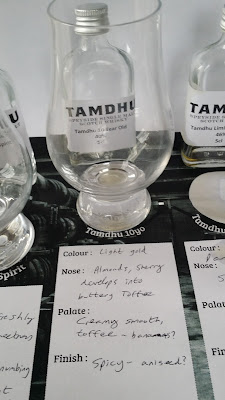 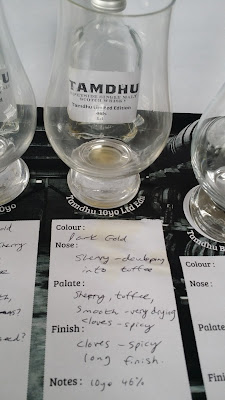 Distillery : Tamdhu
Whisky : Batch Strength No 002
Characteristics : 700ml 58.5% ABV
Price : £60
Colour : Dark Gold
Nose : Toffee, Vanilla, Citrus - maybe orange - no rough edge like the previous two
Palate : Toffee, orange - drying in the mouth, again with spicy cloves or cinnamon on the tongue
Finish : Long orange oil finish
Overall : For all it's strength - this one was my favourite on the night - strong yes - but a lovely sipping whisky, the addition of a little water added to the vanilla on the nose and orange on the palate and finish.
Link : Batch Strength 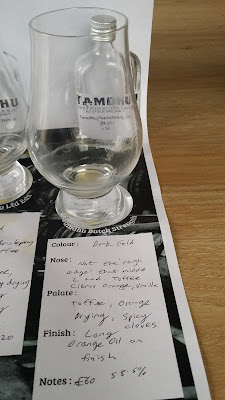 Many thanks to Steve for organising and @TamdhuWhisky for the samples and my fellow tasters for a really enjoyable evening!

By MaltMusings on May 02, 2017 No comments: Links to this post
Email ThisBlogThis!Share to TwitterShare to FacebookShare to Pinterest
Labels: Tamdhu, TweetTasting
Newer Posts Older Posts Home
Subscribe to: Posts (Atom)