Today I've taken part in a first - the first @Glengoyne @TweetTasting - and I hope it won't be the last! Four fantastic drams were sampled and discussed and a great time was had by all!

As usual with these things a parcel arrived a couple of days before the event:

Included were a lovely branded tasting glass, samples of Glengoyne's 10, 12 and 18 year olds and a mystery sample simply labelled "?" but weighing in at an impressive 59.8% There was some speculation on Twitter about the contents of the bottle, most agreeing that it would be the latest batch release of Cask Strength. On the day before the tasting Glengoyne officially released the Cask Strength Batch 006!

Series 3 of #BlindTasting has recently finished and as usual I'll post a summary. Following on from fantastic Series 1 & 2 - this one was brought up a few surprised with the five of us trying to identify 15 mystery drams through smell and taste, having #NoPreconceivedIdeas or #MarketingBullshit to sway our opinions. 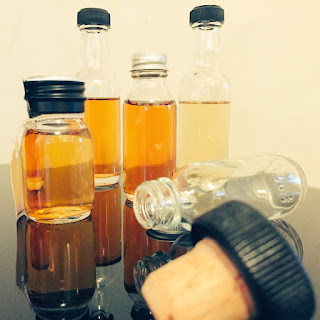 As part of their 120th Anniversary celebrations and the Spirit Of Speyside festival Tamdhu held a tasting in the filling store of the distillery broadcast live on Facebook. Thanks to Steve @TweetTastings a number of us were also able to join it at home, following along online and sharing our thoughts on twitter.

As usual with these things a parcel arrived a few days before the tasting...

Read more »
By MaltMusings on May 06, 2018 No comments: Links to this post
Email ThisBlogThis!Share to TwitterShare to FacebookShare to Pinterest
Labels: Spirit Of Speyside, Tamdhu, TweetTasting

This week I was pleased to be included in the @TweetTasting to celebrate the 20th Anniversary of the restart of production at @Benromach after the distillery was taken over in 1993 by  Gordon & MacPhail, refurbished and re-opened in 1998.

As is usual with these things a few days before the tasting a parcel arrived...

Three samples were enclosed including the Benromach 10yo, 15yo and newly launched 20th Anniversary Bottling.