What's coming out of Girvan these days?

William Grant and Sons' Girvan distillery complex in Ayrshire has released a number of new whiskies over the last few years - let's take a look at some of them.

As well as the Girvan site, Grants also own the Balvenie and Glenfiddich distilleries in Speyside.

Most of the grain whisky distilled at Girvan is used in Grant's blends with occasional casks being taken by independent bottlers, but in October 2013 they released their own 25yo under the name Girvan Patent Still. Then a few months later in April 2014 they released the No. 4 Apps (a distillery term for ‘apparatus’). 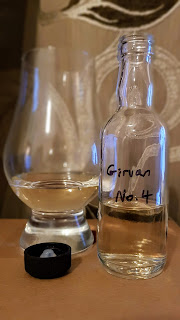 Whisky: No. 4 Apps Single Grain 42% uncoloured but chill-filtered (sample from @andy_watkinson)
In the glass: very pale gold - nothing like what's shown in the bottle pictures! Swirls lead to slow fat legs.
Nose: Fresh cut grass, lemon, a little smoke?
Palate: Slightly oily, watered down honey with a lovely spicy bite. There's lots of apple and pear notes - it's a very morish dram!
Finish: Spicy, slightly smoky - maybe a bitter chocolate note?
Comments: You'd think this might be something similar to Bain's but it's not - it doesn't have the vanilla intensity, it's more sweet, but it's a cracking dram in it's own way!

The building of the new Ailsa Bay malt distillery on the site in 2007 allowed Grants to introduce a new Lowland Malt whisky to the market, following Grant's tag line of "Deliciously Different" this one had a slight difference - it was peated. 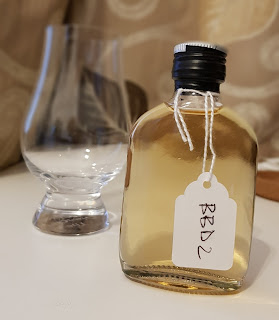 Whisky: Ailsa Bay 48.9% (Blind sample from @JWBassman_)
In the glass: Lovely gold colour, swirls leave thin slow legs, initial nose gives a little smoke!
Nose: Smoke but there's a lot of sweetness behind it, some honey and some damp grass.
Palate: Wow on the palate we have another high ABV here, chewy, slightly oily, lots of sweet honey, a bite of spice and over it all that delicious smoke! There's a slight dryness coming through this one, the smoke has a maritime edge. So the obvious choice would be Islay? Underneath the smoke and honey there's some fruit, it's delicious!
Finish: Lovely smoke with a honey note.


More recently Grants have released the Aerstone pair of 10yo malts to "simplify messaging in the single malt category” by using “clear taste descriptors on pack” because they are suggesting "Whisky is becoming over-complicated".

Aerstone means Air & Earth in Gaelic and the range is made up of a Sea Cask and Land Cask. This got me thinking, as I walked home from buying them, that the mention Land, Sea and Air so close to Remembrance Sunday of the association with the Army, Navy and Airforce. 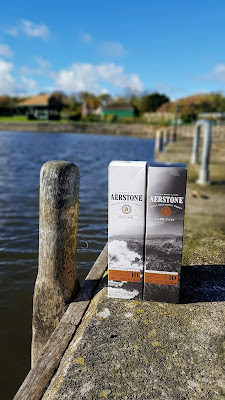 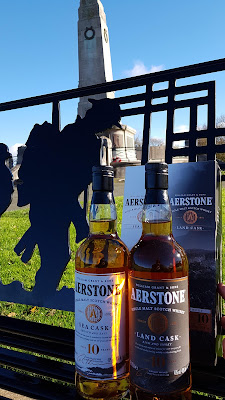 The two bottles are initially a Tesco (UK Supermarket) exclusive selling for £30 each, but currently on offer for £20 each. The Sea bottle being unpeated (the first single malt release from the Ailsa Bay distillery which is) and matured in a warehouse by the sea, is 40% ABV, coloured and chill filtered for uniformity. The Land bottle is peated (highland peat) and matured in a warehouse 'further away' from the sea! It shares it's brother's strength, sun tan and filtering. 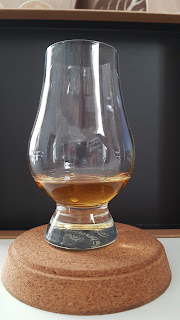 Whisky: Aerstone Sea Cask 40%
In the glass: e150 toffee colour, swirls cling to the glass and run to slow fat legs.
Nose: Fresh cut grass with some sea breeze, vanilla, and some fruity notes: apricots & pears?
Palate: smooth and creamy (oily?), sweet honey, cinnamon spice, tropical fruit and a little drying icing sugar.
Finish: Toffee and spice.
Comments: yes it's a basic dram and at £20 you're not wasting your money - it's a simple non-thinking sit down and enjoy type dram. 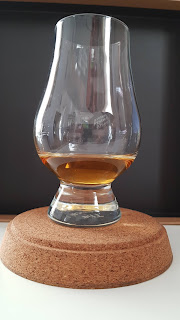 Whisky: Aerstone Land Cask 40%
In the glass: e150 toffee colour, again swirls cling to the glass and run to slow fat legs.
Nose: smokey bacon crisps with some salty notes and a little citrus and spice.
Palate: again smooth and creamy but a bit more thick, there's some honey but not as pronounced as the Sea Cask, some orchard fruit a thin smoky blanket covers everything.
Finish: drying, smokey and a little bit of spice.
Comments: This isn't going to convert all the Islay fanboys out there but it is pleasant enough. Highland peat is more heathery and that shows in the finish. Again it's a simple non-thinking sit down and enjoy type dram and for £20 you can't go wrong.


You can also watch my vlog for these two drams for MaltManMike & Friends.

Grants have recently revamped their 'standard' blend range with 3 new drams which I tried at a recent @TweetTasting. So all of these blends will sell in their millions and buyers want a uniform colour and taste every time they buy a bottle so I'm guessing they are coloured and chill-filtered but can't confirm that. 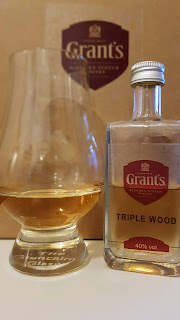 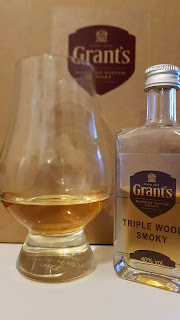 Whisky: Triple Wood Smoky 40%
In the glass: light gold colour, swirls again lead to slow fat legs.
Nose: Smoky bacon, salted nuts, some citrus  and pear notes.
Palate: Nice thick oily mouthfeel, hints of melon and butterscotch all covered in a gentle blanket of smoke, ends with a nice kick of spice.
Finish: Smoky bonfire toffee, drying.
Comments: It's not a bat dram but a ramp up of the smoke would make it much nicer in my opinion! 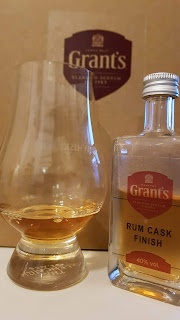 
So some really interesting drams coming out of Girvan and it would be really interesting to go and visit them but, like Loch Lomond, they aren't normally open to the public. Some, like @WhiskyForEveryone, have visited them and despite all my best endeavours Girvan aren't biting claiming they are too industrial! 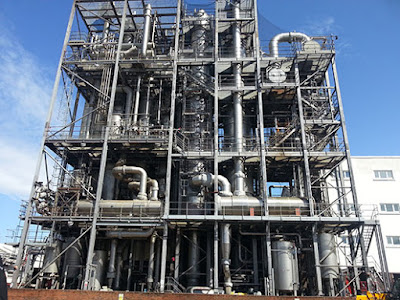 Loch Lomond have a very industrial site and managed to allow us to visit - come on Grants we know it's not all shiny copper pot stills and will look more like a petrochemical plant but there's loads of interest in that for us whisky geeks! I usually wear a hi-vis vest, totectors and a hard hat at work so happy to wear the same to visit you!
By MaltMusings on October 29, 2018
Email ThisBlogThis!Share to TwitterShare to FacebookShare to Pinterest
Labels: Aerstone, Ailsa Bay, Girvan, Grants