Should I join this Syndicate?

Now this is an independent, ad-free blog, where I normally review drams I have either bought myself or swapped with other enthusiasts, so this is a bit of a strange situation! An unexpected message on twitter and an exchange of address resulted in a parcel from @DLaingWhisky. But like most whisky bloggers out there I plan to be fair and honest in my review even though it was a 'freebie'.

Now I've bought, and swapped, a few Douglas Laing bottles in my time, at one end of my 'favourites scale' you have the delicious twenty-something single grains and the 13yo Scallywag, at the other end is The Gauldrons which is just not pleasant. As with all things whisky - these are my onions and yours and your palate will be different!

So where does this dram fit? More importantly what is it?

The parcel had the DL logo on it but the bottle and accompanying postcard don't mention them, the website doesn't even mention them - quite strange. The dram in question is the 12yo Syndicate 58/6 Export which is produced exclusively for Douglas Laing & Co. and widely available overseas but it's not a dram I'd heard of before.


In 1958 a very rare blend of Scotch Malt and Grain Whiskies was discovered in 10 oak casks in The Port of Leith, Edinburgh – in a warehouse owned by William Muir Bond 9 Ltd. (Estd. 1823).
The blend was originally distilled in 1954 and the blend recipe as created by Marshall Taplow Ltd. (Estd. 1760) dates back to the 1800’s.
In 1966 a small quantity of the blend which was now 12 Years Old was bottled for the enjoyment of the Directors of William Muir Bond 9 and a number of their friends.
A total of six individuals were instrumental in forming what became known as Syndicate 58/6 – hence the name. 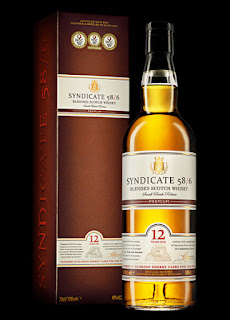 The late Donald Smith and Alastair McIntosh, respectively Chairman and Managing Director of William Muir (Bond 9) Limited, gradually built up the Syndicate over the years and by the mid 1980’s the Syndicate had expanded significantly.
The members, who came from all over the United Kingdom, were personal friends or friends of friends. It had grown into an exclusive and highly discerning club made up of individuals who really appreciated and enjoyed the blend.

The Syndicate blend contains 18 Single Malt Whiskies and 4 Single Grain Whiskies. The quality and consistency of the blend has been maintained over the years by operating a ‘Solera’ system whereby when additional 12 year Old whiskies are added they are reblended with the older stock.

Thus the Syndicate blend still contains small quantities of the original 1958 blend. One of the things that sets the Syndicate blend apart from other blends is that it is ‘married’ and finally matured for up to 2 years in 4 year old Oloroso Sherry casks which we import from the Spanish region of Andalucia. This final marrying and maturation process serves to give the Syndicate blend its exceptionally smooth and distinctive taste.

OK so what about the dram itself? Well it's a 40% ABV, sherry cask finished, coloured blend selling for around £35 so similar to many other blends on the market.

It's a coloured dram so no point going there - swirls leave slow fat legs.

Nose: Initial nose gives big sherry notes and some wet grass. Over time this develops into golden syrup and orchard fruit with maybe a hint of smoke in there somewhere?
.
Palate: Thick mouthfeel, loads more of the golden syrup but with some orange marmalate - there's a big spice kick at the end - cinnamon.

Finish: More of the syrup and a small hint of the smoke but neither last long.

Overall: I didn't want to like this dram - "it's another boring 40% blend" I'd said to myself and actually put off tasting it for a few weeks, but a tidy of the sample box brought it back to my attention. Yes it's another 40% blend but it does have some nice sweet notes and a lovely kick of spice. It's fighting against a lot of other drams out there for the money in your pocket but doesn't quite have that wow factor to make me want to go and buy a bottle. It appears strange to me the DL haven't got their name on it, maybe that would make a difference?
By MaltMusings on August 19, 2018
Email ThisBlogThis!Share to TwitterShare to FacebookShare to Pinterest
Labels: Douglas Laing
Newer Post Older Post Home